This week our E-newsletter previews the next two messages:  “The Cost of Righteousness” (12/23) and “The Proof of Righteousness” (12/24).  As both messages are a continuation of our series Jesus Wins, and preached in close proximity, we thought it made sense to combine our preview.  But after receiving the following jotting of an anonymous young person during last week’s 9:30 service it makes me wonder. 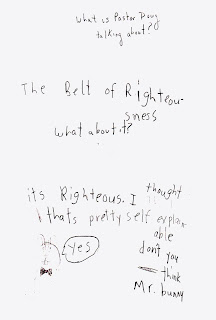 That’s a classic, wouldn’t you say?  I’m considering finding out who this kid is and doing a joint message some Sunday!

Martin Luther came to think of his sin not as that which separated him from God, but as that which brought near to him the Savior who would take away his sin.  If we had no sin, we’d need no Savior.  What the coming of Jesus teaches us is that our sin brings God near to us to grant us wholeness in place of our brokenness, and justification in place of our judgment.


When surveys are conducted among Christians and the question is asked, “What is God’s chief attribute?”  The invariable answer is love.  And yet such an answer begs another question, “If love is God’s chief attribute, how do you explain His judgment?”  After nearly thirty years of ordained ministry I can’t begin to recall the numbers of times I have heard Christians ask, “How could a loving God do/allow ---?”  It’s a question that doesn’t originate with men but was first posited by Satan.


Think of it.  Satan believed that if he could induce men to will their own will rather than God’s will, God will send the same divine response Satan endured.  When Lucifer rebelled, the judgment of God was swift and eternal.  He was cast from the heavenly Eden into a darkened and ruined creation.  For him the words, “The wages of sin is death,” were axiomatic.  He had experienced them firsthand.  And yet, when divine judgment comes on sinful man there’s grace all over it.  In the pronouncements of work and birth and the clothing of animal skins God showers these offenders with His grace.  And, of course, the pinnacle of His grace is heard in His promise of Genesis 3:15.


But by the time we come to Isaiah 55, thousands of years have passed since the Garden and Satan has seen no evidence of his head being crushed.  Indeed, when God invites His people to come and buy food and drink for no money, etc., the vast majority turn Him down opting to satisfy their own will again, rather than His.


In preparation for Christmas Sunday you may wish to consider the following:


1.      What was the point of the Protestant Reformation?


4.      Why does Jesus quote Isaiah more than any other Old Testament prophet?


5.      What is the significance of the covenant referenced in verse 3?


10.  What does it mean to say that without the holiness of God there would be no knowledge of the love of God?


Our Christmas Eve message is a striking illustration of what we cover on Christmas Sunday.  Here in Luke 14:1-14 Jesus is at a Sabbath dinner party thrown by a ruling Pharisee.  Here Jesus is put to the test.  Rather than testing Him with words, they test Him with a broken man in much the same way they test Him in John 7:53-8:11.  They bring in a man who’s suffering from a serious disease to see whether or not Jesus will try to heal him on the Sabbath.  But that’s not the only test present at that party.  The account can be divided into three parts, each providing Jesus center stage.  In part one He deals with the infirm man.  In parts two and three He offers advice about being a guest and a host.  And as we will see on Monday night, in everything Jesus says and does He offers a complete portrait of His Father’s righteous plan to defeat Satan and glorify His name.


In preparation for Monday night, Christmas Eve, you may wish to consider the following.


3.      How does Jesus’ message in these texts address Satan’s rebellion?


8.      How is the point of Righteousness made clear in this text?


See you Sunday and Monday!

"The Belt of Righteousness"

In Luke 18 Jesus tells a story about two men that go to the temple to pray.  In the temple courts public and private prayers were commonplace.  So, one man, a Pharisee, comes into the temple courts and assumes the typical prayer posture.  He lifts his eyes and raises his hands toward the heavens and begins to pray aloud, “O God, thank you that I am not like other men…this tax collector, etc.”


The prayer the Pharisee offer is of a similar sort as this Talmudic one, however he gets much more specific.  He not only lists his virtuous restraint from sin, he makes note of his accomplishments.  While the law required a Jew to fast not only once a year, this guy says he fasts twice a week.  While the law required a tithe of only certain crops, this guy tithes on everything.  From a human perspective he’s one fine fella – a man of considerable virtue, rectitude, and righteousness.


But Jesus begs to differ.  In fact, His antipathy for this man’s prayer and posture is so profound that He juxtapositions him with another man – a tax collector!  Tax collectors were by definition crooked.  Skimming off the top was the nature of their trade.  So, Jesus says this tax collector stands a far off (a popular expression by God to describe the essence of the human condition).  Instead of looking toward the heavens and raising his arms, this man looks at the ground and beats his chest saying, “God, be merciful to me a sinner.”  Now that is the common English translation of his prayer, but the Hebrew is far more pointed than that.  In Hebrew he says, “God, be propitious to me, a sinner.”


Do you know what he’s saying?  It’s the exact opposite of the Pharisee not only in content, but in meaning.  The word “propitious” is the adjectival form of the word “propitiate,” which means “to cause to become favorably inclined,” or “to appease.”  Every Torah-schooled Jew would know exactly what propitiation meant; for once a year the high priest would go behind the veil in the Temple and offer the blood of the atoning sacrifice to satisfy the righteous requirement of God for the sin of His people.  Without the atonement the justice and holiness of God would never be satisfied until every last Hebrew was dead.  Without satisfying the justice and holiness of God satisfied every Hebrew was a goner.  At the heart of God’s relationship with His people was the temple.  And at the heart of the temple was the Ark of the Covenant.  And at the heart of the Ark of the Covenant, on its very lid, was the place of propitiation, called the Mercy Seat, where the blood of the “perfect” substitute was offered.


There’s a lot here, so in preparation for Sunday you may wish to consider the following:


3.      Who is Jesse and why refer to him as the stump out of which the Messiah will come?


4.      How is Israel like a stump when throughout the Old Testament the Lord refers to her as a tree or vine of His own planting?


5.      Why do the Hebrew refer to the Messiah as “a sprout”?  What is so significant about a stump sprouting in Palestine?


8.      Is there any parallel to the characteristics of “the sprout” and those mentioned two chapters earlier?


10.  What significance do you see in the description of this belt i.e. location, purpose, use?


12.  How does the ministry of the Messiah described here run counter to Satan’s mission and exact God’s glory?

The Son of Righteousness

This Sunday we look at another aspect of the coming Messiah and our Victor in the spiritual war by examining the title given to Him in the last chapter of the Old Testament.  Malachi 4:2 says, “But for you who fear my name, the sun of righteousness shall rise with healing in its wings.”


Now the context of this statement is critical.  The prophet is called by God at a time when the people of Israel are under Persian domination.  From the time of the Assyrian and Babylonian captivities hundreds of years earlier, the beleaguered nation has experienced a roller coaster of domination by outsiders.  By now deep discouragement has set in.  The people are asking the same questions others have asked throughout the past 500 years: Where is the restoration God had promised?  Where is this Branch of Jesse, this King of the house of David, who is to deliver us from our enemies?  Where is this everlasting kingdom God promised when we continue as captives in a strange culture?  When will the city that still lies in ruins be transformed into a glorious city of God?  Does God really care about His people? Is there really truth to divine justice?


As discouragement and cynicism set in, the people’s commitment to God’s covenant declines markedly (as it repeatedly did throughout Israel’s history.)  Their temple duties flag.  They begin to neglect their tithes and offerings.  They begin to offer blemished animals.  They begin to marry wives who worshipped foreign gods.  Divorce becomes epidemic.  And it’s into this context that God raises up the prophet Malachi to speak to the issues of the time.  Like other prophets, he allows the Lord Himself to speak directly to His people.  The words of 4:2 are a clear example of God speaking for Himself.  The message of God is simple, yet profound.  “Yes, I do still love you.  And yes, all of the grandeur of the ultimate restoration is coming.”


Charles Haddon Spurgeon said what many other students of Scripture have repeated over the last hundred years.  “We will never err if we allow the New Testament to interrupt the Old.”  Nowhere is that clearer than here in Malachi 3 and 4.  For what God is telling His covenant people in the time of Malachi is the same message He speaks to every one of His people in our day, “for you who fear my name, the sun of righteousness shall rise with healing in its wings.”  As we will see on Sunday, God’s message in Malachi is pure Gospel!


Before I give you some things to consider in preparation for Sunday, it’s instructive to note a few things about this title, “sun of righteousness.”  First, the early Christians (100 AD - 400 AD) took this title to apply to Christ Jesus.  This is the only time it’s used in Scripture, but it’s perfect fulfillment in the life and ministry of Jesus is obvious (see John 1:1; 8:12f, etc.).  Second, light was one of the most frequently used symbols of God in antiquity.  Through history many pagan cultures use light to symbolize other-worldliness and deity.  Third, the concept of righteousness pervades other religious systems like Hinduism, Islam, Zoroastrianism, etc.


Now for some things you may wish to consider:

See you Sunday as we continue our series, Jesus Wins!